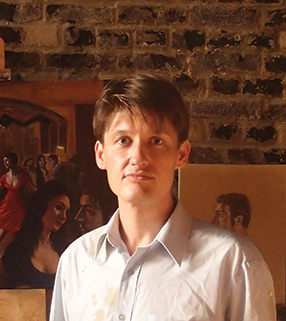 Michael Lightfoot grew up in Britain and Australia, where he started out as an artist, initially as a painter. He’s held four solo exhibitions and been in numerous group exhibitions. Since moving back to the UK he’s also produced storyboards for advertising and film, but has always had to do less glamorous work to get by. His first comics work was a WW1 story written by Matt Duncan, and published in To Arms by Limehouse Comics. In 2018 he started Artists for Brexit, a platform for artists and arts workers who want to honour the result of the 2016 referendum and have their voices heard. He organised Artists for Brexit’s The Big Brexit Party concert and The Civil Times exhibition.